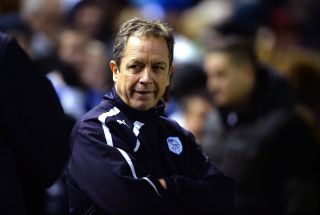 The 53-year-old has penned a two-and-a-half year deal at Hillsborough, after overseeing a revival in the club's fortunes since being handed the reins on an interim basis in December.

A poor start to the season saw Dave Jones lose his job, with Wednesday six points adrift of safety in England's second tier.

But Gray - who served as first-team coach under Jones - has overseen four victories and three draws from nine league matches, a return that has lifted Wednesday to 19th.

The South Yorkshire outfit also confirmed their participation in the fifth round of the FA Cup with a 2-1 triumph at League Two side Rochdale on Saturday.

"I am very happy to say that Stuart has been appointed head coach of Sheffield Wednesday," Mandaric told the club's official website.

"When he was initially asked to step in, his brief was to get us out of the bottom three, get some wins and clean sheets, and make some tangible progress on the pitch.

"Stuart has achieved all those things, he was given the chance to impress and has taken that chance with both hands."

Mandaric also confirmed he is looking to introduce a director of football role to the club in the near future.

"I am trying to implement a modern type of football management and structure of the club.

"In principle, Stuart's title allows him to do the same job, he has full power and responsibility but eventually I would like to introduce a director of football to partner with Stuart and his staff."

Gray has had previous managerial roles at Southampton and Northampton, while also enjoying caretaker roles at Portsmouth and Wolves.