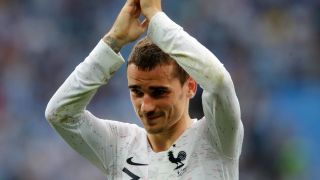 A World Cup full of surprises returned to something like normality on Friday, as France saw off Uruguay to reach the semi-finals.

In a tournament in which Germany crashed out at the bottom of their group, Argentina came back from the dead and still went home, Spain lost on penalties to Russia and England somehow won a shoot-out of their own, the last game to be played in Nizhny Novgorod went largely as expected.

France had only beaten Uruguay once in eight meetings before this and had failed to score in the most recent five. Uruguay had only conceded once in 2018, in the last-16 win over Portugal, and were without the injured Edinson Cavani in attack. This was no recipe for a feast of goals.

Thank goodness, then, for Antoine Griezmann.

The Atletico Madrid forward has not quite sparked into his most devastating form at these finals, but this was the closest he has come. Given the free role again behind Olivier Giroud, he was the only player in the France set-up who seemed willing or capable of drifting to different positions and breaking lines of play.

There are merits to that approach – for one thing, it makes Paul Pogba look like the kind of disciplined, determined-not-to-be-extravagant player that Jose Mourinho seems to want at Manchester United. But when your team has no shots on target for 40 minutes of a World Cup quarter-final, you have to allow for at least one risk-taker. For Didier Deschamps, Griezmann, the top scorer and best player at Euro 2016, is that man.

It was his neat interplay with Pogba that saw Corentin Tolisso fouled on the edge of the box 40 minutes in, and his superb delivery that allowed Raphael Varane to head home France's first goal against Uruguay since 1985. The Real Madrid man just beat Diego Godin to the ball with a perfectly timed run, perhaps showing that, as Deschamps predicted, Griezmann knew at least one weakness about his Atletico team-mate.

3 – France are only the second team to beat three different South American nations in a single World Cup tournament, after the Netherlands in 1974. Total. July 6, 2018

As the game wore on and Uruguay became a little more stretched in their hunt for an equaliser, the green of the pitch seemed to become Griezmann's canvas. The passing became more clever, more attack-minded as the spaces opened up. When the defence gave him just a little too much 20 yards from goal, he sent a swerving strike towards Fernando Muslera, who flapped the ball over his shoulder and into the net, in scenes horribly reminiscent of the game here two weeks ago when Willy Caballero gifted a goal to Ante Rebic.

Griezmann has now scored seven times in his last six tournament knockout matches, has contributed nine goals and three assists overall at the World Cup and European Championship, and is the first France player to score and assist in the same World Cup game outside the group stage since Patrick Vieira in 2006. It's hard to imagine a star player who more regularly delivers.

This was far from wholly convincing from France, even if it became comfortable in the end, and they will need more against Brazil or Belgium in the last four. But with Griezmann starting to find his feet in Russia, a second World Cup triumph – 20 years on from that famous first in Paris – is starting to loom into view.