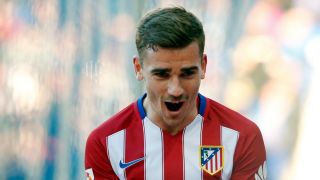 The prolific attacker was heavily linked with a transfer away from Atletico ahead of Euro 2016, with Chelsea, Manchester United and PSG believed to be among his admirers.

Griezmann opted to stay at Atletico, but PSG apparently did make a move for the 25-year-old before he made a final decision on his future.

"Paris Saint-Germain were interested in signing him. We listened to what they had to say because PSG are a club with an interesting project.

"We eventually opted for continuity with Atletico after those talks and weighing up the various offers. But you never know what happens in the future."

Griezmann has also been linked with Barcelona and Real Madrid, but a move within La Liga was never really an option for the forward if Olhats is to be believed.

"Would it have been a wise decision to move to a club where he could potentially win more titles? Barcelona and Real Madrid don't need anyone in attack at the moment..," Olhats added.

Griezmann enjoyed a sublime Euro 2016 campaign, scoring six goals in seven appearances to lead France to the final, where Portugal proved to be too strong.

He won the top scorers title as well as the player of the tournament award.