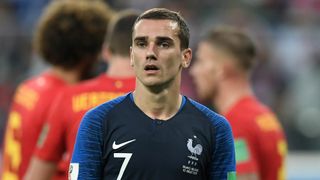 Antoine Griezmann compared France to club side Atletico Madrid after they advanced to the World Cup final with a 1-0 win over Belgium in St Petersburg on Tuesday.

Les Bleus will play in Sunday's showpiece against either Croatia or England in Moscow after Samuel Umtiti's goal in the 51st minute proved enough for the 1998 champions.

It is a second consecutive major tournament final appearance for France after finishing runners-up to Portugal when they hosted Euro 2016, and Griezmann hopes for French joy during the World Cup final.

"I am happy with the performance of my team-mates," he told L'Equipe

"We defended and scored a goal on a set-piece. It was a bit like Atletico.

"It's amazing to see the joy we can give. This was the goal I had set myself at the beginning of the tournament."

Griezmann has been one of France's most influential players in Russia, scoring three goals and assisting twice in six matches.