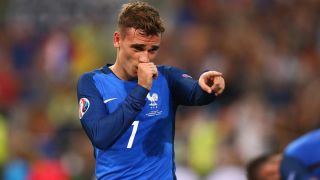 Griezmann has been the star of Euro 2016, scoring six times to lead France into Sunday's final against Portugal in Paris.

For the Atletico Madrid man, it has led to comparisons to famous countrymen Zidane and Platini – the latter being the only one to score more at a single European Championship with his nine in 1984.

"We have again a guy that can make us win, why not?

"If we win, you're going to be almost sure that it's because Antoine Griezmann scored."

Standing between Griezmann, France and a first major title since Euro 2000 are Portugal and star Cristiano Ronaldo.

Ronaldo has scored three times at the tournament so far, with Fernando Santos' men criticised for their style of play.

However, Henry warned the Real Madrid star only needed a couple of moments to potentially be decisive.

"You know in the game he's going to have chances. Now you have to hope that he's not going to score," the Arsenal great said.

"Ronaldo can be almost anonymous in the game, but he still knows that he's going to have one or two chances to score the goal.

"It's very difficult to stop a guy like that."