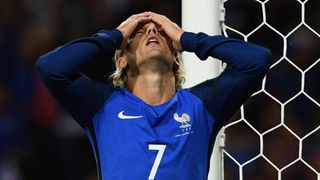 France star Antoine Griezmann said the "beautiful" performance of Luxembourg to earn a 0-0 draw in Toulouse reminded him of the toil usually exerted by his club Atletico Madrid.

Griezmann hit the crossbar with a first-half free-kick, just one of 34 shots that failed to find a way past goalkeeper Jonathan Joubert.

Luxembourg's point was just their fifth of the campaign, but it proved enough to lift them off the foot of Group A, which France lead by a solitary point from Sweden.

France had smashed Netherlands 4-0 on Thursday and Griezmann thought the tight turnaround contributed to their struggles, but took nothing away from Luc Holtz's men.

He told Canal+: "Two matches in three days, it was difficult especially for me it was because I was suspended during my last club match.

"We had 11 warriors in front of us, and for me, it was beautiful to see because it reminds me a bit of my club, but we will continue to work."

France captain Hugo Lloris was also effusive in his praise for a heroic showing from the visitors, while expressing frustration at the failure to win.

"After the Netherlands win, we had the first place with a three-point lead, here we lost two," Lloris told reporters.

"The only thing that keeps us positive is that we are in a better situation than we were, but it is true that this is a big disappointment tonight.

"We have to stay calm, there are still two matches to play, including a tough trip to Bulgaria.

"We had to do more, to be more of a killer in the box, to be a little more thoughtful in the last choices and the last passes, everything happened in the last metres.

"They had a lot of luck and were heroic."