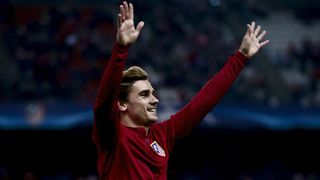 Atletico Madrid have received a boost ahead of Saturday's derby against Real Madrid, with Juanfran claiming star forward Antoine Griezmann will be fit to play.

Griezmann's LaLiga derby participation has been in doubt after suffering heavy bruising to his foot during France's World Cup qualifying win over Sweden last week.

But Atletico defender Juanfran revealed Griezmann - who has eight goals and five assists in 14 games in all competitions this season - is set to face Zinedine Zidane's visitors.

"I have asked Griezmann this morning if he will play the derby and told me that yes, he will play," Juanfran told Partidazo COPE.

This weekend's derby will be the final league match between the two Spanish capital giants at the Vincente Calderon, as Atletico prepare to move to their new stadium next season.

And fourth-placed Atletico are only eyeing victory in their attempt to close the gap on league-leading Madrid, who are two points clear atop the standings.

Juanfran added: "It will be the last derby at the Calderon and will be special for us.

"We feel that we will win. We are only thinking about winning."