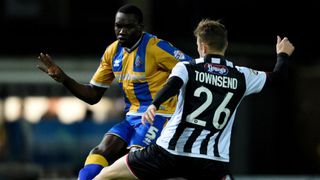 Grimsby Town and Shrewsbury Town held each other to a 0-0 draw in Monday's FA Cup second-round tie, which saw a sickening head injury to visiting goalkeeper Jayson Leutwiler.

With a third-round encounter at 2008 runners-up Cardiff City on the line, neither side was able to fashion a winner at Blundell Park.

There was major concern for Leutwiler towards the end of the first half, after the Shrewsbury keeper collided heavily with the knee of the onrushing Conor Townsend.

Following lengthy treatment, Leutwiler was carried from the field on a stretcher but was reported to be conscious in the dressing room at half-time.

Grimsby had gone close to opening the scoring before Leutwiler's injury when Padraig Amond turned and volleyed against the crossbar in one smooth motion.

And Leutwiler's replacement Mark Halstead was also fortunate in the second half as Townsend's cross from the left got caught in the wind and smacked against the bar before rebounding to safety.