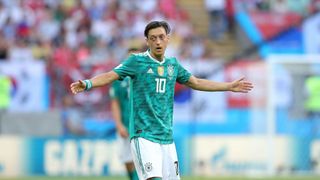 German Football Federation (DFB) president Reinhard Grindel has rejected Mesut Ozil's accusation of racism and made no indication that he plans to bow to pressure and resign.

Ozil stepped away from international football on Sunday after releasing a three-part statement in which he hit out at the DFB, Grindel and the media after being widely condemned for meeting with Turkish president Recep Tayyip Erdogan prior to the World Cup.

The former Real Madrid man, who has Turkish roots, claimed the DFB and Grindel had not done enough to protect him following Joachim Low's side's subsequent group-stage exit in Russia, suggesting he had been made a scapegoat due to his background, even stating: "If we win, I'm German. If we lose, I'm an immigrant."

The DFB on Monday rejected Ozil's claims of racism and reiterated their belief that the player should have explained his motive behind the meeting, as team-mate Ilkay Gundogan did.

Erdogan is a controversial figure and his get-together with Ozil and Gundogan came at a time when several German citizens were being held on political charges as part of a crackdown on free speech in Turkey.

The issue has done nothing for the DFB's image but Grindel has vowed to tackle it head on.

"Football has a high socio-political relevance," Grindel's statement began. "This is underlined by the discussions of the past few days.

"The resignation statement by Mesut Ozil has triggered a debate on racism in general and the ability of football to integrate in particular. As DFB president, I do not want to escape this debate.

"The performance at the World Cup has questioned many things. Of course, I also ask myself what I could have done better during this time.

"I openly admit that the personal criticism hit me. Even more, I feel sorry for my colleagues, the many volunteers at the base and the staff in the DFB, to be called in connection with racism. For the association and for me personally, I reject this decidedly.

"The values of the DFB are also my values. Diversity, solidarity, anti-discrimination and integration are all values and beliefs that are close to my heart.

"During my time at the DFB, I have been able to experience what football can do for integration, and I am very proud of how much we move in our association, in the national associations, in each individual club.

"We live our values. That's why we as the DFB have critically questioned the photo with the Turkish president Erdogan. I deeply regret that this was misused [by fans] for racist slogans.

"Looking back, as president I should have said unequivocally what is natural for me as a person and for all of us as a federation: any form of racist hostility is unbearable, unacceptable and intolerable.

"That was true in the case of Jerome Boateng, this applies to Mesut Ozil, as well as to all players who have a migration background.

"In the conference with my colleagues from the national associations and in the presidium with the representatives of the amateur and the professional sector, we have defined a common line. It is now for the DFB to tackle three key issues.

"Firstly, we need to take the ongoing debate on integration and the changing sounding board for this issue in our society as an opportunity to develop our work in this area and to ask where and how we can give new impetus.

"Secondly, as a consequence of the disappointing World Cup, there must be a sound athletic analysis, from which the right conclusions are drawn in order to play enthusiastic, successful football again. That is the task of the sports management, whom we have given the necessary time.

"And thirdly, we all have the great common goal of winning the bid for the hosting of the 2024 European Championship. For all these projects we work together in the coming weeks and months with great commitment.

"The tournament can tell a new story of football, bring children into the clubs, bring people closer together. With and without migration background. United by football."