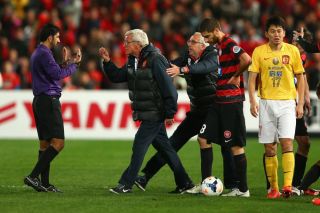 The Italian tactician walked onto Parramatta Stadium late in his team's 1-0 first-leg quarter-final loss to Western Sydney, furious with a red card shown to Gao Lin.

Lippi was fuming post-match after his side finished the gamewith nine men after two controversial red cards, the other handed to Zhang Linpeng.

Along with the two red-carded players, Lippi will be sidelined for Wednesday's second leg at Tianhe Stadium as the defending champions look to progress.

An Asian Football Confederation (AFC) statement read: "The former Italian national team manager has been provisionally suspended in accordance with Article 129 of the AFC Disciplinary Code after he entered the field of play to confront the match referee, Mohammed Abdulla Hassan (UAE), in the dying stages of the quarterfinals first leg match following the sending off of a second Guangzhou player.

"Lippi will therefore not be allowed to sit in the continental champions' dugout at the return leg to be played on 27 August in Guangzhou.

"The final decision of the AFC Disciplinary Committee will be issued following the completion of a full investigation. The Chinese Football Association has been notified of the decision."