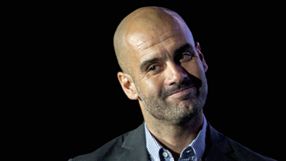 Guardiola, who is learning German and will stay in New York for now to avoid distracting the team and current coach Jupp Heynckes, agreed a three-year deal with the four-times European champions in a major coup for Bayern.

"Money was not the issue for Guardiola," Rummenigge told a packed news conference. "[In the negotiations] we could see that Pep had a fondness for Bayern and could see himself working here."

"We have a good image and you could see that in the talks with Guardiola," said Rummenigge. "He liked the whole package. This is what we threw into the equation."

Former Barcelona coach Guardiola, who won 14 titles in four years at the club before taking a year off in New York, was on the wish list of almost every major European outfit. Her will be brining in two assistants with him.

"He will stay in New York where he is intensively learning German, because when he comes he wants to be prepared in such a way that it all runs smoothly." Rummennige told reporters.

"He does not want in any way to affect the work of Jupp Heynckes during the season."

Bayern, without silverware for the past two seasons, are in contention in three competitions and are top of the Bundesliga, nine points clear with the league set to resume on Friday after a four-week winter break.

Rummenigge, who said he had also received congratulations from Barcelona's president, ruled out any official presentation of the 41-year-old in the near future.

"We will not make a big show with Guardiola. He would not want that either," a beaming Rummenigge said before noting the importance of the Spaniard's decision for German football.

"We are delighted and also somewhat proud that Pep Gaurdiola decided in favour of Bayern. The three-year deal is a sign that we have full confidence in him," Rummenigge said.

"Guardiola is superb individual with a lot of charisma. The Bundesliga needs that charisma. Maybe some other clubs will follow suit."