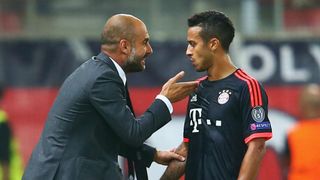 Bayern Munich midfielder Thiago Alcantara feels Pep Guardiola is the best coach in history, voicing his disappointment at the Spaniard's decision to exit the club at the end of the season.

Guardiola confirmed last month that he is to leave Bayern when his contract expires in June, with former Real Madrid boss Carlo Ancelotti to replace him.

Chelsea, Manchester United and Manchester City have all been mooted as potential destinations for Guardiola - who brought Thiago to the Allianz Arena from former club Barcelona in 2013.

Having played under Guardiola at Bayern and Camp Nou, the Spain international has lauded the 44-year-old's coaching abilities.

"All of you know how Pep Guardiola is as a manager... he is the best coach in history," said the midfielder.

"I have shared great moments with him and bad moments but you know how somebody is in bad moments and he always was there.

"I came to Bayern with him and I am so grateful as he brought me the opportunity to play at a great club like Bayern.

"It is sad that he has to leave... he is a manager who needs time to know the team and we are now in a good dynamic.

"The things are working as he wants, or we want, so it is a shame that he has to leave but we have to respect his decision."