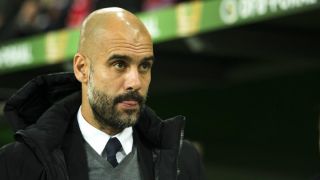 Pep Guardiola has voiced his delight with Bayern Munich's performance in their 3-1 DFB Pokal win over holders Wolfsburg on Tuesday.

The Bundesliga champions created numerous chances in the opening 45 minutes as they effectively put the match to bed before the break, with Douglas Costa and Thomas Muller's brace helping Bayern to a 3-0 lead at half-time.

Andre Schurrle would eventually pull one back for Wolfsburg in the closing stages of the encounter, yet Guardiola had nothing but praise for his players.

"I can only congratulate the team. The lads put in a great performance and were very aggressive on the ball," Guardiola said post-match.

"We were very tidy on the ball and hardly ever lost possession. We were aware of Wolfsburg's quality and wanted to defend high up the pitch.

"The opening 45 minutes were incredibly convincing. We are very, very happy with our performance and with the result."

The draw for the DFB Pokal round of 16 takes place on Sunday.