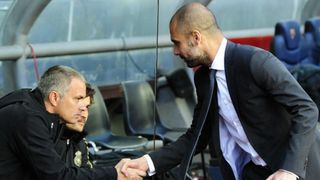 Manchester City boss Pep Guardiola says he has learned from competing with Jose Mourinho - but insists next season is about more than just their rivalry.

Mourinho was appointed Manchester United manager in May, just after Louis van Gaal had guided the club to their first FA Cup win since 2004.

As coaches of Real Madrid and Barcelona, Mourinho and Guardiola developed a white-hot rivalry, but the Portuguese stated this week that he would have more than one "enemy" in the Premier League next term.

And Guardiola, addressing the media for the first time since succeeding Manuel Pellegrini at the Etihad Stadium, says his only reason to focus on Mourinho would be to learn ways in which he can improve his own skills.

"I think Jose spoke pretty well – it's not about him or me," Guardiola said. "We played each other many times, I can only say the big coaches helped me to reach another level. Jurgen Klopp at Borussia Dortmund, Thomas Tuchel... a lot of others made me better.

"All managers want to win and we're going to try to do that as well."

"Conte is a master tactician, he's a great signing for Chelsea," the City boss said. "It will be very interesting to compete against managers like him.

"I don't know why the other coaches came here. I came here as a player a few times, and as a coach we came many times and said 'wow, it's pretty good', and not just the atmosphere."

Guardiola, who signed a three-year contract at the Etihad Stadium, is looking forward to trying his hand in England's top flight - but he does not expect this job to be his last in football.

"I don't think so," said the 45-year-old. "I'll always be grateful to the club for letting me join the Premier League. They gave me this challenge and I'll be grateful for that. I'll do my best until the last day, to achieve what we want."