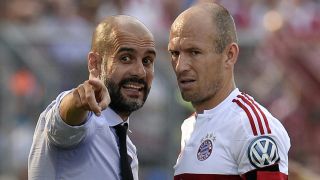 Bayern Munich attacker Arjen Robben expects Pep Guardiola to be successful, if he has a quality squad at his disposal in the Premier League.

Guardiola has confirmed his desire to move to England next season, with Manchester City tipped to be his most likely destination.

The Bayern coach has enjoyed success in Germany and Spain, as well as in the Champions League.

Robben said the Spaniard was sure to be just as good in the Premier League, as long as he had the quality.

"You never know. It depends on a lot of things. We don't know which team he will manage," the Netherlands international said.

"But I'm convinced that with his qualities, his playing style, and how he thinks about football, if he has got good players, he will do fine."

Robben said nothing had changed at Bayern, despite Guardiola announcing he would be leaving at the end of the campaign.

"Relieved? I don't know. To me he just seems the same," he said.

"He is motivated as always and completely focused. I can't see a big change."