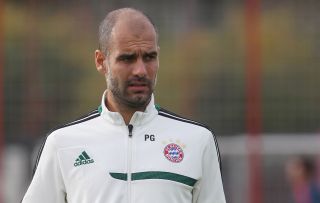 The 42-year-old had a trophy-laden four-year spell in charge at the Camp Nou, winning 14 trophies including three La Liga titles and two UEFA Champions Leagues.

After departing the Spanish champions at the end of the 2011-12 campaign, Guardiola took a sabbatical before taking over a Bayern side that completed a treble of the Bundesliga, Champions League and DFB-Pokal last season in July.

The Spaniard has overseen an impressive start to the season, with Bayern winning seven and drawing two of their nine league fixtures and taking nine points from their three Champions League games.

Parallels have been drawn in style between Guardiola's all-conquering Barca outfit and his new side, but the coach has insisted he is not looking to emulate his former team.

Speaking to La Gazzetta dello Sport, he said: "I don't want to transform Bayern into a new Barca.

"The mentality is different, and the style, the environment, the culture, the players too. This club has won too much to copy others.

"I came here because I wanted to coach these players.

"Bayern Munich are bigger than my ideas. I have only to maintain last season's level, of an unbeatable team that played in an incredible way.

"A coach must understand the qualities of his men and be able to take advantage of these."

Bayern continue their Bundesliga campaign when they welcome Hertha Berlin to the Allianz Arena on Saturday.