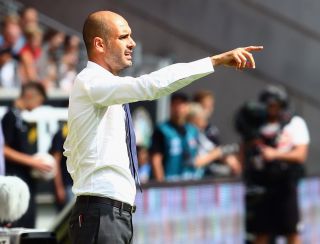 Following victories over Borussia Monchengladbach and Eintracht Frankfurt in their previous fixtures, the win over Nuremberg ensured Bayern stay joint top of the table and broke a club record of 27 consecutive Bundesliga games without losing.

The former Barcelona manager gave close-season signing Mario Gotze his debut from the start, and was delighted with his side's performance.

Guardiola said: "The win was important. I am happy - especially with the second half and our control of the game.

"Especially when Franck (Ribery) and Arjen (Robben) have the ball, we can break quickly. Nuremberg were incredibly well organised. Against these teams it is always difficult."

Bayern travel to Freiburg for their next Bundesliga clash on Tuesday.