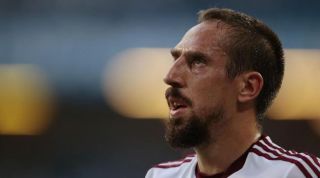 Frenchman Ribery, who recently announced his retirement from international football, missed the World Cup due to a back injury and has been troubled with knee problems in recent weeks.

Ribery played in Bayern's pre-season friendly against Guadalajara in New York at the start of the month, but coach Guardiola has ruled the former Marseille man out of Friday's Bundesliga opener at home to Wolfsburg - although fellow winger Arjen Robben could feature.

"Franck will be out for two or three weeks through injury," said the Spaniard on Thursday. "He still needs time.

"Arjen is fit but hasn't played yet. I'll have to see who is in the best shape. Then I'll decide who plays."

Guardiola is looking forward to his second season in charge at the Allianz Arena and hopes to see a slicker version of Bayern this year as they look to win a third straight German title.

"The Bundesliga is our main objective, it's the most valuable title," he added. "We'll work for it every day.

"I want my side to play better and quicker this season.

"Wolfsburg have some outstanding players, they're very well organised. It will be a good test."

Ribery is not the only player unavailable for Guardiola on Friday, with Rafinha (ankle), Javi Martinez, Bastian Schweinsteiger and Thiago Alcantara (all knee) also sidelined.