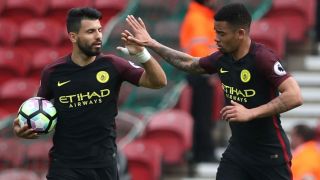 Argentina star Aguero and Brazil sensation Jesus started a match together for the first time last weekend, with both men on target despite a largely disjointed display from City at relegation-threatened Middlesbrough.

A groin injury suffered by Aguero during the closing stages at the Riverside Stadium, shortly after he crossed for Jesus to head the visitors' second equaliser in a 2-2 draw, means he will miss the visit of Crystal Palace on Saturday.

His penalty against Middlesbrough was Aguero's 31st of the season, although wingers Leroy Sane and Raheem Sterling have the next best return of nine apiece in Guardiola's squad.

Jesus has four goals in as many Premier League starts, having recently returned from the broken metatarsal that hindered a flying start to life in England.

The 20-year-old's February form saw Aguero left on the bench but Guardiola told a pre-match news conference he would have liked to more frequently depart from his preference for one central striker and play the duo in tandem.

"I would have preferred to play with him and Sergio together because of our lack of goals this season," he said.

"We could have adjusted something. The last game was the first time we played with two strikers – [out and out] strikers.

"We would have needed a little bit to adjust. It is complicated to do that [but] our lack of goals this season would have been better.

"Of course we have him, we have Keli [Kelechi Iheanacho], we have other players to try to score goals."

Back and in the hunt for goals! fronts the programme. Get your copy at the game! May 5, 2017

City failed to capitalise upon Manchester United's draw with Swansea City last time out and steal a march in the battle for a top-four spot.

Guardiola's men lie fourth, a point above their neighbours and three shy of Liverpool with a game in hand on Jurgen Klopp's third-place side.

They have won only twice in their past eight league matches – a far cry from the run of 10 consecutive wins in all competitions that saw City start the season with a flourish.

"We were consistent in the first two months and then after that, all the season, we were inconsistent," said Guardiola, before lamenting a familiar problem.

"The team was more inconsistent than consistent because in the boxes we were not good.

"In this league, everything happens in the boxes. In other leagues, the people take care of the process in the middle. Here, the middle doesn't happen – it goes there and there, there and there."

Keep pushing to the finishing line! Four games to go starting tomorrow! May 5, 2017

Nevertheless, the former Barcelona and Bayern Munich boss was keen to refute suggestions he has been caught off guard by England's top flight.

"When I sat on my sofa, watching the games in the Premier League I immediately realised how they played here. It's your culture. I knew that before I came here and now I realise it when I am here."