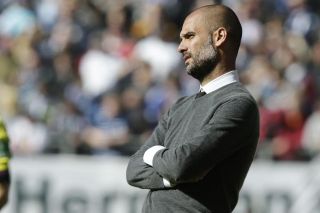 Despite a successful debut campaign at the Allianz Arena, which saw Bayern wrap up the Bundesliga in record time, the Spaniard has attracted criticism for their continental efforts this term.

Bayern saw their UEFA Champions League title defence ended in comprehensive fashion by Real Madrid thanks to a 5-0 defeat over two legs, with critics suggesting a possession-based style cost the German champions dear.

Amid criticisms from club legends such as Franz Beckenbauer and Stefan Effenberg, Guardiola will meet with sporting director Matthias Sammer and CEO Karl-Heinz Rummenigge after their meeting with Borussia Dortmund in Berlin in order to determine Bayern's approach going forward.

"After the cup final I'll talk to Sammer and Rummenigge, we'll put our ideas on the table and we'll make a decision, one that's best for them and for the club," he said after Saturday's 4-1 win over Hamburg.

Guardiola reiterated that he remains at ease with the pressure surrounding his position - stating it comes with the territory of managing a club such as Bayern.

"I know where I am. I know that at this club you always have to win; that was also the case at my previous team," the former Barcelona boss added.

"We've won three trophies and we're in the German Cup final, but it's true that we haven't played well recently, above all in the first half at the Allianz against Real Madrid.

"This is normal; I know that if we don’t win, I'm in danger. We always are as coaches, all the more so at the big teams."