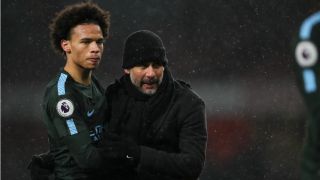 Manchester City manager Pep Guardiola has encouraged Leroy Sane to use his World Cup snub as motivation this season.

Germany, the defending champions, went on to fail spectacularly in the tournament, exiting at the first round for the first time since 1938.

And Guardiola wants the 22-year-old to use the disappointment of missing out to spur him on, as he said: "Leroy has to accept that this decision may make him stronger.

''He has the chance to show the national team from Germany and first of all us, he has another season to show his quality.

"He's so young and in two years it is another European Championships and then in four years another World Cup.

"I think it's the past now. The national trainer decided what's the best for the national team."