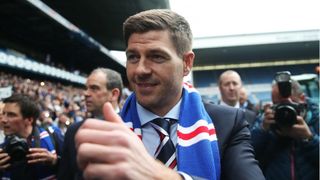 Gerrard signed a four-year deal to become Rangers boss from next season – the post with the Scottish giants marking a first senior managerial role for the ex-Liverpool and England captain.

Guardiola, who secured his maiden Premier League title with City last month, wished Gerrard luck in the considerable challenge of trying to topple Celtic in the Scottish Premier League and believes a number of his celebrated Three Lions contemporaries should consider following suit.

"Being a football player in the past does not mean you will be a good manager – some exceptional managers were not football players – but I admire his courage to do that huge challenge," he told a news conference ahead of City's Premier League match against Huddersfield Town.

"Of course, they are one of the two most important teams in Scotland. To make that step sends a good signal to the other young managers, to go there after the other years when they didn't have success and to compete a little bit harder with Celtic.

"It is important for the old English players like Gerrard, Frank Lampard, [John] Terry or [Paul] Scholes or Michael Carrick.

"It is so, so important them being in football because they can help to make this amazing game more beautiful.

Gerrard and the other players listed by Guardiola were part of an England team dubbed the "Golden Generation" but were unable to progress beyond three consecutive quarter-finals at major tournaments between 2002 and 2006.