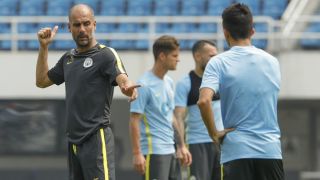 Manchester City coach Pep Guardiola has warned his players "danger is coming" if they are not fully fit.

Full-back Gael Clichy revealed the new Etihad Stadium boss has banned some players from first-team training due to concerns over their fitness, while pizza and certain drinks had been outlawed.

Guardiola has denied the suggestion some stars returned to pre-season having become overweight, but explained his concerns that anyone short of peak condition will risk injury.

"They were not overweight but I want my players fit," he said, speaking ahead of the International Champions Cup clash with Borussia Dortmund.

"When you are not fit and [your] weight is not proper, danger is coming. They are not fast enough - that's why I want my players to be absolutely fit."

City's game with Dortmund is their first since last week's 1-0 loss to Bayern Munich, a clash against Manchester United on Monday having been cancelled due to concerns over the pitch.

Guardiola says he is exploring the prospect of playing an additional friendly in England against a lower-league club after the frustration of missing out on a test against Jose Mourinho's side.

"Tomorrow we are so happy to finally play here in China. We are disappointed by what happened – we need to play games," he said. "We wanted to play against United but the pitch was not acceptable. Now we're happy to play this game.

"Maybe we play one friendly game next week in our centre. We're trying to look for a team from the Championship or League One. Maybe."