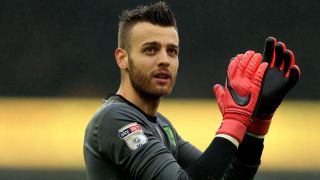 Gunn moves to St Mary’s Stadium having failed to make a first-team appearance at City, signing a five-year deal to join Mark Hughes' side.

The 22-year-old spent the 2017-18 season on loan in the Championship at Norwich City, the club where his father, Bryan, played for over a decade.

He has represented England at youth level, including helping the Under-21 squad triumph at the Toulon Tournament in 2016, and was called up to train with the full squad prior to the friendly with Brazil in November 2017.

"Angus is a player who clearly possesses a tremendous amount of potential, but his performances for Norwich and for the England Under-21 team also demonstrate the capabilities he already has right now," Hughes said.

is delighted to announce the arrival of highly-rated Under-21 international goalkeeper ! July 10, 2018

"We believe he has all the credentials to become a full international goalkeeper for England in the future, and that’s exactly the sort of talent we want to have here at Southampton."