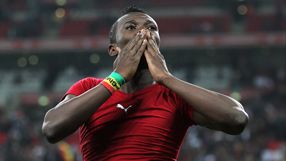 The 25-year-old striker, who moved to Sunderland after his outstanding performances for Ghana in last year's World Cup, struck in stoppage time to give his side a richly-deserved 1-1 draw.

Collecting the ball on the edge of the penalty area he jinked one way and another, dummied England defender Joleon Lescott twice then curled a left-foot shot into the far corner of Joe Hart's net.

Gyan will always be remembered for missing the penalty against Uruguay that would have taken Ghana into the semi-finals of the World Cup but now also has his country's first goal against England on his soccer CV.

"I am happy because it's an important goal for the country and for the fans," he told reporters.

"I was twisting and turning, but honestly, I didn't know what I was doing, I was just trying to protect the ball.

"The English defenders are very intelligent, but they did not know if I was going to pass the ball, but I thought, well they might push me down, but they didn't do that, so I thought, I've got a chance, so I took my chance."

"This goal is something historic - its the first goal we've scored against England."

Asked if this was the "64 million dollar goal" that will make Europe's big teams sit up and take notice of him, he replied: "No, I am a player at Sunderland, I am just concentrating on that. I am very young, I have lots more to do in football, so I am just working hard."

"I just wanted to dance after scoring it, the atmosphere was wild - I didn't get the chance to dance because suddenly everyone else was on top of me, but maybe I will next time."

The goal gave Ghana a deserved draw in a superb match in which England coach Fabio Capello made seven changes from the side that beat Wales 2-0 in a Euro qualifier on Saturday. giving debuts to second-half substitutes Matt Jarvis and Danny Welbeck and a first start to Gary Cahill after two substitute appearances.

The Italian said that despite giving up the late equaliser he was delighted with his team's performance.

"I'm really happy because I saw a fantastic game, not a friendly game," he said.

"Every tackle was a fight, the players played very well, the players that played not a lot of games here, the new players, played well.

"It was interesting for me to know the value of these players when they need to play here at Wembley, in the senior shirt. All the players played really really good."

England took the lead after 43 minutes when Andy Carroll scored his first goal for his country with a fierce, low left-foot drive that flew into Richard Kingson's net.

Capello said he was delighted for the 21-year-old that he found the net because he was not yet fully fit after recovering from a thigh injury that delayed his Liverpool debut by several weeks.

"I remember Carroll before he suffered the injury problems. He's the same player, runs a lot, always fight, he needs games and I am delighted he scored tonight."