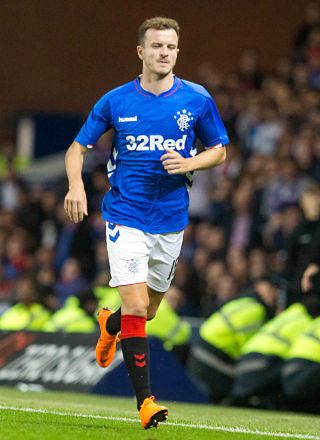 Rangers still have one game left this season but Andy Halliday is already desperate for the next campaign to get started.

Steven Gerrard’s side failed in their quest for silverware this season but midfielder Halliday is convinced big strides forward have been made.

Rangers head to Kilmarnock on Sunday looking to secure a seventh straight win from their final game.

And the Light Blues’ recent resurgence – capped off by last week’s Old Firm triumph – has convinced 27-year-old Halliday his team will be at the very least pushing Celtic close for the Ladbrokes Premiership title once the action resumes after the summer.

Halliday, asked if he believed Rangers were on the verge of launching a realistic title tilt, said: “One hundred per cent yes. I think it’s the first time in a long time I’m going into the summer really excited to start again next year.

“The progress has been there for all to see and I think even behind the scenes there has been a lot of progress that maybe the outside world doesn’t quite see.

“It’s well documented the changes we have made to the training ground but I think overall, in terms of the mentality of the playing squad, we’ve brought in a lot of experienced players, a lot of leaders, and overall it’s a better environment around the place.”

Halliday was hit with a one-match ban after his part in the post-match Celtic Park spat with Scott Brown back in March.

His place went to Jon Flanagan and the former Liverpool left-back has stubbornly refused to give it up in the weeks since.

Flanagan was due to miss this weekend’s clash with Steve Clarke’s side but a successful appeal against his own two-game suspension for fouling Brown at Ibrox last week means he is now free to face Killie.

And Halliday admits he can have no complaints if the Englishman gets the nod again at Rugby Park.

“It’s certainly not been easy watching the team from the bench but it makes it a lot easier when the team are doing very well and picking up results,” he said.

“Obviously I was in the team at that point when we went to Parkhead and I felt I was doing well.

“Since then it’s been very hard to get back in, but it’s hard to argue with the manager’s decision, especially with Flanno going into that position and he has done so well for himself having been out for a long period of time.

“All credit to Flanno because when he was out he never complained, he never sulked. He just got on with his business every single day and when he got his chance he took it.”

Rangers can complete their first-ever clean sweep of post-split fixtures with victory in Ayrshire and Halliday says that is all the motivation his side need as they look to put a dent in Kilmarnock’s Europa League ambitions.

“We have never made a clean sweep in the top six and it’s a pretty good record to try and chase,” he said.

“We’ve had many great Rangers teams in the past that have not managed to achieve that, so it’s a good incentive for us to go into the game and try and get a result.”