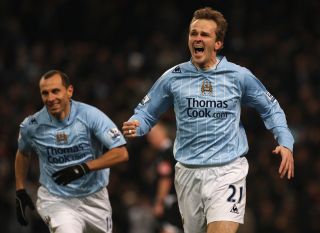 City have been the biggest movers in the transfer market of the English Premier League title challengers, bringing in Alvaro Negredo, Stevan Jovetic, Fernandinho and Jesus Navas in the off-season.

Hamann is confident the new faces will help deliver the goals that will allow the club to push Manchester United and Chelsea for the title.

While admitting Manuel Pellegrini's side had been made to pay more than they should for some players, the former Germany international is excited by the additions.

"I think they've overspent in the past, it's well documented that they paid more than they needed to pay," said former midfielder Hamann, who played 54 league games for City between 2006 and 2009.

"But then again, the club that sold knew the money was there and I think the same happened again this season.

"They have bought very well, maybe they spent a little too much, but I think Fernandinho, Negredo, and then the other two players (Navas and Jovetic) they brought in could make a huge difference to them.

"Fernandinho is a player who can score goals from midfield, brings them energy, and I think this is what they have been lacking."

Hamann believes a lack of goalscoring options was the reason City failed to retain their title last season.

But he feels the injection of pace the likes of Navas and Jovetic provide will see the side score more goals this campaign, which could prove the difference.

"The reason they didn't win the league last year, or didn't contend, was that they didn't score enough goals," Hamann said.

"They still had the best defensive record ... (but) going forward they were poor.

"They missed (Sergio) Aguero for large parts of the season, and sometimes when they play with (Gareth) Barry and Javi Garcia I think they are a bit too predictable, especially when they play at home.

"I think a player like Fernandinho has got that energy and that pace, that speed to go away from players that could make a huge difference.

"So I think they've addressed that and I think all in all they've bought very well this summer."

City open their Premier League season with a home clash against Newcastle at Etihad Stadium on Monday.