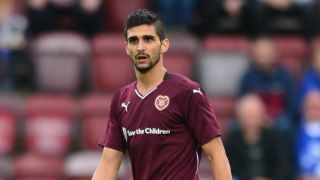 Ten-man Hearts were forced to settle for a 0-0 draw at Hamilton Academical in the Scottish Premiership on Sunday.

Robbie Neilson's men played over half of the match with a numerical disadvantage after defender Igor Rossi was sent off for a two-footed challenge in the 40th minute.

Hearts still had the best chances, with Blazej Augustyn and Dario Zanatta both heading against the crossbar in the final 20 minutes.

Hamilton, who lost 8-1 to Celtic last time out, themselves had a man sent off when Jesus Garcia Tena committed a bad challenge with three minutes remaining.

The draw means third-placed Hearts are eight points behind Aberdeen in second and the same margin clear of Ross County in fourth.

Hamilton, meanwhile, have only won one of their last 15 league games and stay 10th in the table.