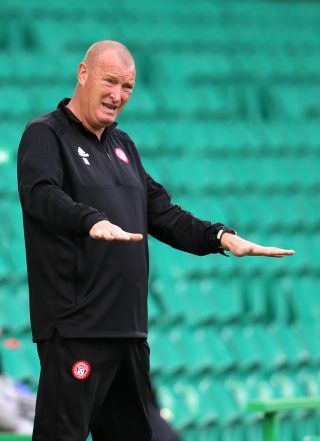 Hamilton boss Brian Rice had no qualms about travelling to the Highlands for a first-hand view of Saturday’s opponents Ross County.

The Staggies’ match against Motherwell on Monday night was televised live but the Accies manager preferred to be in the stand in Dingwall to see the home side’s 1-0 win.

Rice was also a spectator at the St Mirren versus Livingston match in Paisley on Saturday, the day before Hamilton lost 5-1 at Celtic Park in their opening Premiership fixture.

“Sometimes you can only get the telly and you can’t make it but in my opinion, you have got to be there to see,” said Rice, who revealed midfielder Ronan Hughes will be out for “quite a while” with a hamstring injury.

“That’s how I work. everybody works differently. Some managers don’t go, they send their assistants or their analysts or whatever.

“I like to be hands on. I always go, I always have done, it is the same with players.

“I’ve got to see players playing before I sign them. I signed a player once that I didn’t see and it was a mistake.

“And I like the drive, it gives me time to think. I was three hours back from Dingwall, thinking about how they played, how I would like to play against them. It is great having time to yourself.

“I think it is very important for me to see the opposition.”

He said: “I thought they done very well. They started the game better than Motherwell and defended very well in the second half but I expected that.

“I was talking to my lads today. The Highland teams never get the recognition they deserve.

“I know how good the teams in the Highlands are and I know Ross County are a very good team.”

Rice paid tribute to former Hibernian and Motherwell player Willie Hunter, who died earlier in the week at the age of 80.

The former Hibs and Nottingham Forest midfielder said: “Willie Hunter was at Hibs when I went there at 16, helping with the reserves and the youth teams and he worked a lot with me, with my passing, my control.

“I wasn’t blessed with pace even at that age so I had to be good at everything else.

“Even when I went to Nottingham he used to come down and watch the game, talk to me.

“He was a fantastic man, a gentleman, so very sad news this week.”