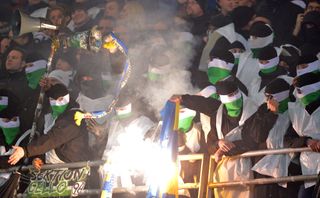 The Lower Saxony neighbours played out a 0-0 draw at the HDI-Arena, although the game was delayed as flares were thrown onto the pitch just six minutes in.

Arrests were made before and after the game as fans clashed with riot police in the streets, with the local rivals playing for the first time in a decade.

Dufner lamented afterwards that trouble had been inevitable and does not expect those culpable to pay for their actions.

"This is utter nonsense and highly dangerous in the truest sense of the word," he told Sky Deutschland. "We condemn these actions in the strongest terms.

"We would call for consequences, but they will not come around.

"That it would happen, to us, was obvious.

"I think that's what was expected in advance for this."