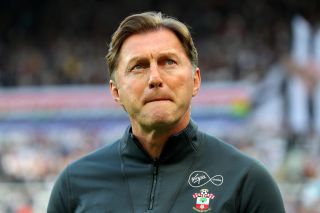 Ralph Hasenhuttl says he needs to improve Southampton’s squad but expects to have a “difficult summer” due to a restricted transfer budget.

The Austrian has implemented his high-intensity pressing style on the players he inherited but, having made a habit of dropping points from winning positions in recent weeks, is keen to bring in reinforcements for the 2019-20 campaign.

“We need to have more quality next season,” said Hasenhuttl, whose team finished the season with a 1-1 draw at home to relegated Huddersfield.

“It will be a difficult summer I think because we have our limits with transfer fees, things like that.

“But we must be clear that we have to make a few new players in the team.

“We have to sign a few new players and work with them in the same way we work with our players now and try to create a new spirit.”

Southampton appeared set to end a difficult season on a high following Nathan Redmond’s thumping first-half strike from the edge of the box.

Midfielder Oriol Romeu admits Saints, who finished in 16th place, need to learn from the mistakes of this season.

“We’ve done a great job with the manager and we’re all very pleased with where we are right now,” he told the club website.

“We wanted to win as many points as possible to finish in a good way and we haven’t done it.

“It’s probably an example of how tough this league is and how demanding it will be next season.

“It’s something we have to do better and we’re ready to learn from this season so that it can’t happen again.”

Huddersfield defender Tommy Smith made his 200th appearance for the club at St Mary’s.

After the Terriers’ return to the Sky Bet Championship was confirmed in late March, Smith is optimistic about the future under manager Jan Siewert.

“I said from the minute he walked in it wasn’t going to be a quick fix; he’s not a magician,” Smith told Huddersfield’s website.

“There’s not one manager in any league that could come in and change a club around like a drop of a hat; it doesn’t work like that.

“It’s a work in progress. It looks now like it’s taking shape a little bit now.

“He’s got another summer and pre-season he can look forward to, to get his ideas more across to the players. We are looking forward to it.”