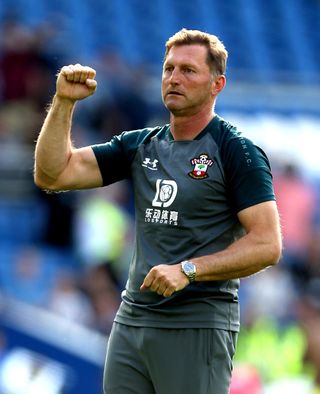 Southampton manager Ralph Hasenhuttl wants his team to rise above the hostile welcome which will await them against bitter rivals Portsmouth at Fratton Park in the Carabao Cup.

The two south-coast clubs have not gone head to head in one of English football’s most intense contests since 2012.

With the Saints now in the Premier League and Pompey battling back from severe financial problems to try to get promoted from League One, there will be plenty of bragging rights on the line on Tuesday night.

While Hasenhuttl knows full well what a win would mean to Saints fans, the Austrian insists his players must focus on their own performance – whatever atmosphere they run out into.

“I have seen the videos about the history of these games, about the rivalry… I know everything,” the Southampton manager said.

“I can say that every member of this club and team is looking forward to this game, because we have a big chance to write the history in our way.

“I expect a very tight game against an opponent who gives everything, and in the end hopefully there will be the right winner.

“It is important for us and for my team that we know what we are focusing on, which is our performance and we will show this from the first minute.

“We are not going there thinking it is easy, we will need the very best performance ever.”

While the Pompey faithful will certainly look to play things up off the pitch, Hasenhuttl is only concerned by matters on it as his team seek a swift response to a 3-1 home Premier League defeat by Bournemouth.

“Finally it ends up 11 against 11 on the ground, everything before and after the game we should move away from,” Hasenhuttl told a press conference.

“That is not really something we can influence. For us it is more important to focus on the 90 minutes on the pitch.

“At places like Burnley and Sheffield (United), you cannot say it was a nice atmosphere in the stadium – it was also very loud, we have to compete as a team on the pitch.

“I have seen similar games in Germany in the cup, where there were about 6,000 police in the town to make everything safe.

“What I want to see is a football celebration, two teams that do everything to win.”

Hasenhuttl has vowed to send out the “best possible team” but will again be without forward Moussa Djenepo, who is continuing to recover from a muscle issue.

“It can take longer until he is back in the team, which is not really good for us that he could be longer out,” the Southampton boss said.

“It is a very difficult injury because the tendon is a little bit hurt and it is a big risk to take him on the pitch. He still has problems with his muscle and he cannot shoot.

“It also can be that the other muscles take the function and try to make this muscle more stable, but in the moment I don’t have a really good message.”