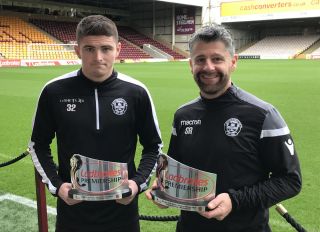 Motherwell manager Stephen Robinson defended Jake Hastie after the young winger was booed by his own club’s fans during the defeat to St Johnstone.

A Scott Tanser spot-kick and a Murray Davidson strike eased the Perth side to a comfortable victory which secured them seventh place ahead of their opponents – but it was overshadowed by the abuse aimed at Hastie, who is joining Rangers in the summer.

A section of travelling supporters barracked their own player as he warmed up and again when manager Stephen Robinson pitched him into the action with his side trailing by two goals.

“Nothing surprises me in football, ever,” said Robinson.

“He’s a super boy and I think the world of him and it’s unfortunate. It’s something he’s going to have to deal with.

“There’s a lot of players other than Jake Hastie not staying at the football club and I’ll use any player available to me until they’re not involved with Motherwell any more.”

Well players were angered by a controversial decision by rookie top-flight referee Colin Steven to deny them a first-half penalty with the game deadlocked.

Striker Gboly Ariyibi’s shot was blocked on the line by full-back Tanser and they were convinced a hand had been used.

But Robinson refused to use that as en excuse.

“It was possibly a turning point but I’m not going to blame the referee,” he said.

“Even if we don’t get the decision – and people seem to think it was a definite penalty – we still have to defend it better.

“We have to look at ourselves. We can affect that, we can’t affect referees.”

Saints manager Tommy Wright was delighted to secure seventh place with one game left in the season.

And he admitted to a huge sense of relief that full-back Tanser had buried the first-half penalty after seeing his team squander five spot-kicks this term.

“The biggest relief was scoring a penalty,” Wright admitted.

“Scott was put on them so I’m glad we were able to score it.

“If we had missed another one I would have been away up the tunnel I think.”