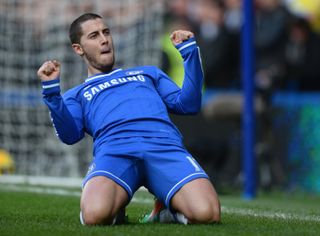 The Belgium international sparkled in the 3-0 triumph over Newcastle United on Saturday, scoring a hat-trick as Chelsea moved to the top of the table.

That followed an equally impressive performance from Hazard in Chelsea's 1-0 victory at City last Monday.

But while the 23-year-old is hopeful the club can retain top spot, he feels Manuel Pellegrini's team remain favourites in a tight race.

Speaking to Chelsea's official website, he said: "At the moment we are playing well and picking up plenty of points. We are first in the table now and we hope we can stay there until the end of the season.

"I think we are less well-armed than (Manchester) City even though when we played there we won. Arsenal lost heavily at Liverpool but they are a great side too so we will see.

"There isn't a lot of difference between the teams so it will be in the (small) details. The best (team) will come out on top."

Hazard is also hoping to continue his own purple patch in order to help Chelsea collect trophies this season.

"I'm going through a good period at the moment," he added. "I try to enjoy myself every match with my team-mates. It's all going well.

"I've played a lot of very good games in my Chelsea career. The last against Man City was very good as well and it was a great performance on my part against Newcastle, but the whole team did well from the first to the last minute.

"I'm happy in life, I'm happy with my football and I'm happy at this club. I am in good form now, lots of nice things are happening and I hope to continue like this."