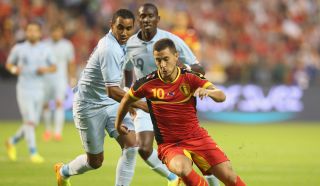 Belgium booked their spot at the 2014 FIFA World Cup on Friday as a pair of goals from Romelu Lukaku helped them to a 2-1 Group A win over Croatia.

Wilmots' side have starred during the qualification process, winning eight of their nine matches, and Hazard was a key part of their success.

The 22-year-old scored twice in the eight qualifiers he played in, but was regularly employed out wide, as opposed to his favourite position.

Hazard – who has previously had his issues with Wilmots – refrained to criticise the coach, but expressed a desire to play just behind the strikers.

"It's up to the coach, it is his choice," Hazard said.

"I love playing at number 10 and he knows it but for the moment I'm enjoying playing out on the wing."

Hazard has made nine appearances for Chelsea this season, scoring two goals.