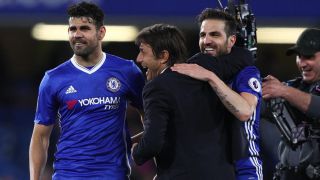 Fabregas made just his 11th league start of the season, setting up two goals in a 3-0 win over Middlesbrough on Monday.

The Spaniard became the first player to record 10 assists in six different Premier League seasons as Chelsea moved seven points clear at the top and Middlesbrough's relegation was confirmed.

Fabregas initially struggled for starts under Conte, but the Italian hailed the midfielder after he set up goals for Diego Costa and Nemanja Matic – either side of Marcos Alonso's effort.

"Cesc is one of the best examples of our season. This season he didn't play a lot at the start," Conte said.

"Then, through hard work, he improved a lot and now he is playing in every game. This development of Cesc is our development.

"We started the season not in the right way, with a lot of problems, and only through hard work and finding the right solutions together have we found the right way.

"I think Cesc is showing he is a fantastic player and I'm pleased for him. I saw this season he put himself in this team in every moment if he played, or if he didn't play.

"Now he is deserving this."

With a seven-point advantage at the top and three games to play, Chelsea can win the title with a victory at West Brom on Friday.