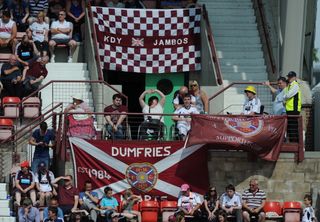 The Scottish Premier League side were forced to call in the administrators in mid-June due to outstanding debts owed to companies formerly owned by their former chairman Vladimir Romanov.

This move into administration led to a complaint being raised against them, which in turn saw a charge of an alleged breach of the Scottish Football Association's (SFA) ruling relating to a club suffering an insolvency event.

Hearts struggled last season as troubles off the pitch affected their performances. They eventually finished 10th int he SPL, but face an uphill battle to retain their top-flight status as they will begin the new campaign under a registration embargo and a 15-point penalty.

An SFA panel were due to meet on Thursday to decide their punishment, but the governing body were forced to delay their decision.

In a statement, the SFA said: "Due to the unavailability of Tribunal members, today's Judicial Panel Tribunal has been postponed. The Principle Hearing relating to the Notice of Complaint issued to Heart of Midlothian will now take place on Thursday, 1 August."

When the panel do convene next month, Hearts face the possibility of incurring a number of penalties, ranging from a fine to suspension or even termination of their SFA membership.