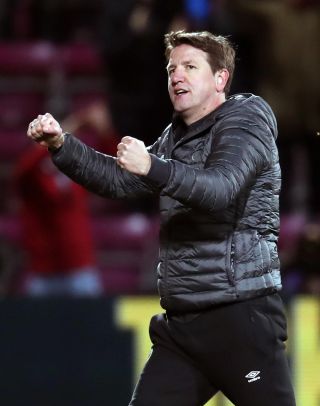 Daniel Stendel confessed Hearts had luck on their side as they reached the quarter-finals of the Scottish Cup with a narrow victory over Falkirk.

Sean Clare’s second-half penalty was the decisive moment in a match that sprung to life after the break.

The weather conditions ensured it was always going to be a difficult night for both teams but Hearts emerged the happier as they booked their place in the last-eight.

It could have been a different story had Falkirk not been denied an equaliser on a hat-trick of occasions but a relieved Stendel insisted victory was the only thing that mattered for the Jambos.

He said: “It wasn’t so easy but in the end it was important we won the game.

“In some situations we had some luck but we have not had it in the last games. Today, it was on our side.

“They had some chances but you could see we were the better team.

“In the end, we scored. It was a penalty, it doesn’t matter. We scored, we won the game and this is the important point.

“We knew it would not be easy. Falkirk started the way we expected and we lost our confidence a little bit in the first half and gave them the chance to come into the game.

“In the end, I’m happy with the result. Our game was like the weather, not really great, but it was just important we got into the next round. It’s very positive for us.”

Gary Miller then crashed a shot off the crossbar as the Bairns piled forward in search of a leveller.

However, there was to be no way back into the game for the League One side.

Co-manager David McCracken said: “We’re gutted. Over the piece we created a number of opportunities.

“We started the second half pretty well but the penalty came against us and it’s disappointing.

“For us, a big positive was the way we reacted to it. We came back into it, we created a few opportunities and it’s (about) the fine lines and taking those opportunities when you’re on top.

“That would have been the perfect opportunity to get back into the game and create some momentum.

“You start to think ‘is one going to go in?’ but unfortunately it didn’t.

“We’re gutted, ultimately we’re out the cup, but we still take positives out of the game.”