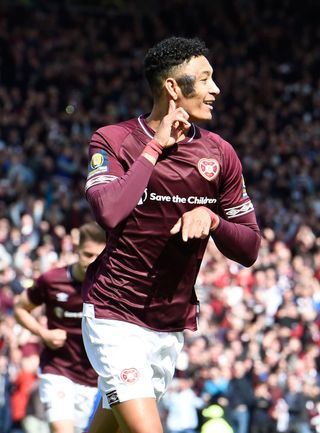 Daniel Stendel celebrated his first victory as Hearts manager after watching his team sweep to an emphatic 5-0 Scottish Cup win over Airdrie.

Andy Irving, Sean Clare, Steven Naismith, Euan Henderson and Craig Halkett all got on the scoresheet against the League One club.

The win was Premiership basement side Hearts’ first in 10 matches, with Stendel having overseen six of those.

Hearts defender John Souttar made his comeback following a five month lay-off but Stendel lost Uche Ikpeazu before the game and Aaron Hickey and Michael Smith in the first half, all with injuries.

Any early nerves among the hosts were settled when Irving put Hearts in front after seven minutes.

The midfielder received a pass back from Naismith from a short corner before slotting the ball through a ruck of players into the far corner of David Hutton’s net.

A carbon copy of that move should have produced a second goal six minutes later but Souttar hit a loose ball wide from 10 yards.

But Airdrie did not come to Tyncastle to sit in and their constant pressing in the Hearts’ half made life uncomfortable for the home side.

The League One club created their best chance in the 28th minute when Paul McKay’s long throw fell to Dale Carrick, but the forward’s shot was deflected over by Hearts full-back Clare.

Hearts then got their two-goal cushion in the 54th minute when Clare lashed a stunning volley into the net after Ben Garuccio’s cross was only partially cleared.

Naismith added a third four minutes later with a simple tap in at the front post after connecting with Henderson’s cross.

The roles were reversed in the 71st minute when Naismith crossed for Henderson to find the gaping net, the playmaker notching his first goal for the club.

And Halkett added a fifth in stoppage time when he connected with Irving’s corner from close range.