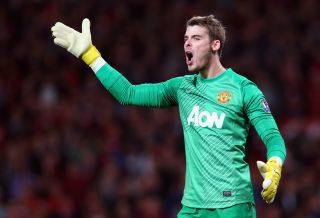 De Gea turned in a fine performance on Saturday to deny the likes of Stoke City striker Jonathan Walters as United twice came from behind to win 3-2 at Old Trafford.

It was Hernandez's first Premier League goal of the season that clinched the victory, but the Mexico international striker was quick to heap lavish praise on de Gea's all-round performance and quality, likening him to former United star Edwin van der Sar.

"We are a team and there are no heroes, but in some games there are players who make the difference and David was the one on Saturday," the striker told the club's official website.

"He's a wonderful goalkeeper. For me, he's probably the best one in the world.

"People don't like to say that but, for me, he probably is.

"David and Edwin van der Sar are two of the best goalkeepers I have trained with - wonderful. Same level, same style and David is improving day by day."