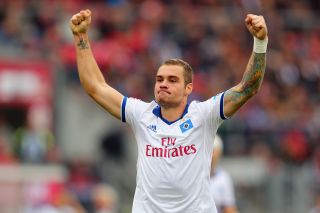 Lasogga, 21, is on loan at Hamburg from Hertha and scored a hat-trick as Bert van Marwijk's men eased to a 5-0 victory over Nuremberg.

Hamburg have already indicated they would be interested in securing the former Germany Under-21 international's services for the long-term.

However, Hertha have moved swiftly to play down speculation Lasogga will be allowed to leave.

"At this point in time Pierre-Michel Lasogga is on loan at Hamburg.

"He still has a contract left at our club and will be back in training with our club come the new campaign."

Lasogga joined Hertha from Bayer Leverkusen in 2010 and scored 24 goals in 69 appearances prior to his recent loan switch.