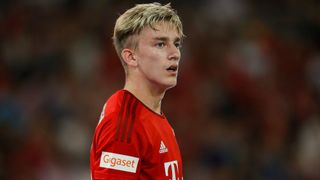 Bayern Munich have confirmed that Sinan Kurt has signed for Hertha Berlin on a three-and-a-half-year contract.

The 19-year-old has spent the entire campaign with the Bayern second team and did not travel for the mid-season training camp in Doha in order to seal a transfer.

"Sinan Kurt has moved from Bayern Munich to Hertha with immediate effect," a statement released by the Bundesliga champions confirmed.

"The 19-year-old has passed the medical checks with the Berliners and as signed a contract until June 30, 2019.

"The clubs have agreed not to disclose the transfer fee."

Kurt joined Bayern in 2014 from Borussia Monchengladbach, but his only Bundesliga appearance to date came against Hertha in the 2014-15 campaign.

Reports in Germany claim Bayern have insisted on a buy-back clause which will become active in 2018, thought to be between €8million and €10m.