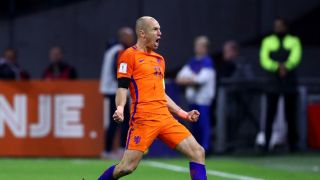 Netherlands coach Dick Advocaat paid tribute to Arjen Robben following his retirement from international football, accepting that they "will miss" one of the world's "best players".

Robben was the star of the show on Tuesday when Sweden visited Amsterdam, scoring both goals and generally standing out as Netherlands won 2-0.

The result saw the Dutch fall well short of what they needed in order to keep their World Cup qualification hopes alive, however, as they required seven goals and to win by six to pip Sweden to a play-off place.

Upon the confirmation that their World Cup ambitions were officially over, Robben made no delay in announcing that his 96th game for the Oranje was to be his last, and Advocaat – whose future is also unclear – is sorry to see him go.

Speaking to reporters after the game, Advocaat said: "Arjen was, still is, one of the best players in the world. He'll still do his job at club level.

"But it's a real miss of the national team, playing without him, because he's such a quality player. We'll miss him, no doubts about that."