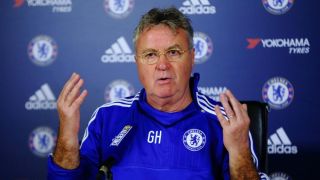 Chelsea are in a battle to avoid relegation from the Premier League as far as manager Guus Hiddink is concerned.

The champions have had a dreadful 2015-16 season and sit 14th in the table after 21 games, having drawn 2-2 with West Brom in midweek, with a double-header of matches against Everton and Arsenal to come.

Hiddink has repeatedly insisted that he will not give up on the distant prospect of a top-four finish until it is mathematically impossible, but called for realism in his pre-match media conference ahead of Saturday's game at home to Everton.

"There is a 12-point difference to fourth place and Tottenham, which is a gap," he said.

"Of course we all like to look forward and to the top of the table but also don't be unrealistic, you are six points off the line of relegation, that is also a fact.

"So we have to work hard and be very concentrated to gather our points so that we can step up.

"That is why it was a pity that in 86 minutes we got this draw against West Brom which would have helped us a lot in going up.

"It [a relegation battle] is a very realistic view. We were down when we started, we were one point off the relegation line. Now we have a little bit more room to breathe but have two difficult games coming up.

"Everton have a very good away record - in the last 10 games I think they have got a result nine times, then Arsenal, which means two very difficult games.

"If you don't gather the points, you don't know what the others can do and the Premier League can surprise you."