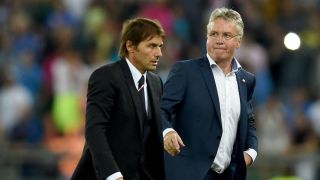 Guus Hiddink is open to the possibility of aiding Antonio Conte when the Italian arrives to take over at Chelsea prior to next season.

Conte's appointment at the club was confirmed earlier this month, with interim boss Hiddink set to step down at the conclusion of 2015-16.

After guiding Italy in Euro 2016, Conte will take over a club which failed spectacularly in its defence of the Premier League title, leading to Jose Mourinho's sacking and Hiddink's subsequent arrival in December.

And the Dutchman says he will be happy to advise Conte, should the new manager need it.

"To get the force back in the club is the aim," Hiddink said in a media conference.

"It's the end of the season, analysis will be made, and recharge with fresh energy.

"At the end, If I am asked, I am available for this club, no matter who knocks on the door.

"One can make analysis, but It is not for me to do it in front of the press."

With six league games to go, 10th-placed Chelsea have little to play for in the remainder of the season, and Hiddink says the lack of silverware on offer makes motivation difficult.

But the Dutchman warned they can ill-afford to take it easy, with Manchester City visiting Stamford Bridge in the Premier League on Saturday.

"After the defeats suffered in the FA Cup and Champions League, then there's a little bit of emptiness," he said. "You are empty - there is no silverware to go for.

"We knew it would be a difficult season, and we managed to get away from the relegation zone, but at the end you hope to get silverware as the next step.

"You feel, hey, nothing is left at stake. But you have to regather. You have seen a bit of reaction going into injuries, but you can let that happen one or two days then we get you back on the team.

"That's what is going on now - the team is back, they must show what they are capable of. You can mourn a few days, you can be sad, whatever.

"Now, for the rest of the season it is important to show what they can do - for themselves, as an obligation for the club, and also beneficial for Chelsea.

"And there is a side obligation of playing in the summer at the Euros."