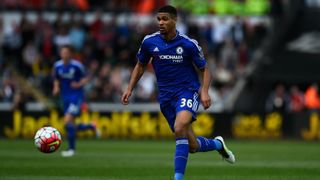 Chelsea interim manager Guus Hiddink is happy to give the club's youngsters a chance to impress with only pride left to play for this season.

The reigning Premier League champions are out of the Champions League and FA Cup and 13 points off fourth spot, and Hiddink said he would give the club's fringe players a chance to shine.

Chelsea suffered a 1-0 loss to Swansea City on Saturday, costing Hiddink his undefeated record in the Premier League since replacing Jose Mourinho on an interim basis.

"It’s not a personal objective [staying unbeaten] but at the same time if it’s the objective then you win games, Chelsea win games, the team wins," said Hiddink.

"You can see now we have given some younger players opportunities to play. There is a risk you can lose more easily than when everyone is on board.

"I prefer to give chances to people playing less frequently and then having the risk of defeat."

Hiddink has given chances to the likes of Ruben Loftus-Cheek, Bertrand Traore as well as Asmir Begovic, with the latter chosen for the game against Swansea as a reward for his professional approach to Chelsea.

"The idea behind it was that Begovic is doing his job as a professional very well in training to keep himself in shape," Hiddink said.

"Every training session he is 100 per cent committed and on top of that he is helping out [Thibaut] Courtois in a very good professional way, and that’s why I rewarded him by having him play at least once."

Hiddink is approaching the end of his caretaker tenure at Stamford Bridge - his second time in the role - with Italy coach Antonio Conte set to take the reins next season.