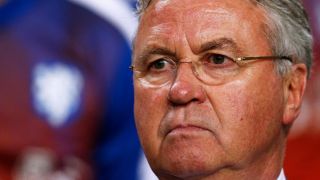 Netherlands coach Guus Hiddink was unhappy with more than just the last 20 minutes of his team's shock loss to United States.

The Dutch were 3-1 up in Amsterdam on Friday, only to concede three goals from the 70th-minute mark onwards.

John Brooks pulled a goal back for USA before Daniel Williams equalised and Bobby Wood scored the winner.

But Hiddink was concerned with more than just his team's finish to the game.

"We have made some good goals but at 0-0 there were two or three saves from [Dutch goalkeeper] Jasper Cillessen."

He added: "We always create opportunities, but we haven't killed off the game."

Netherlands face Latvia in a crucial Euro 2016 qualifier on June 12, with Hiddink's side sitting third in Group A and five points off second place.

Hiddink refused to use match conditioning as an excuse for the loss to USA.

"I'm more concerned about the lack of intelligence than about the condition," he said.

Midfielder Wesley Sneijder, who came on in the 78th minute, said a victory had been thrown away by his team.

''We have made very big mistakes tonight. That is disappointing," he said.