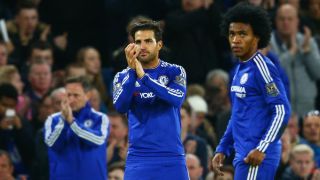 Guus Hiddink has leapt to the defence of midfielder Cesc Fabregas, whom he believes is not to blame for Chelsea's slump this season.

Fabregas has been singled out for much of the criticism directed at the embattled Premier League champions, in a season which has seen the London club lose nine of 19 league games and win just five, resulting in the dismissal of manager Jose Mourinho last month.

But while Hiddink said Fabregas is not to blame for Chelsea's predicament, the interim manager admitted the Spain international faces a battle to retain his spot in the team.

"I think we are focusing too much on Cesc in this regard," Hiddink said.

"The whole team weren't doing well until December. It's not just one player.

"When you look at the goals conceded, that's not just our defence that is not good enough. It's the whole team’s performance.

"I don't want to focus on just one player who might need a bit more strength or ­whatever to get back into shape."

One thing that counts in Fabregas' favour is his ability to play in deeper or more advanced midfield roles, although with Nemanja Matic and John Obi Mikel playing well as holding midfielders, the former Barcelona and Arsenal star may be required further up the field.

"He can play both. It depends also on the strength of the opponent. It's not just one fixed team," Hiddink said.

"There are games where we want a different balance. It's not about a goalie and 10 outfield players. We want 14 or 15 ­potentially good players who, when they're needed, can go into the line-up.

"One time it might be Mikel. The next it might be Cesc or others. It depends on the opponents, too."