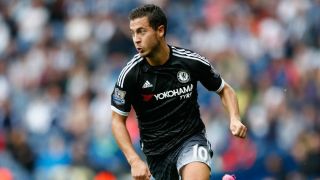 Chelsea playmaker Eden Hazard will have a scan on Monday to determine the seriousness of the groin injury he sustained during a 3-0 Premier League win at Crystal Palace.

Having returned to the Chelsea starting XI in the team's previous two matches following a hip complaint, Belgium international Hazard pulled up awkwardly after taking a shot in the ninth minute at Selhurst Park on Sunday.

He gestured to the away bench in pain shortly afterwards and hobbled off after 16 minutes.

"Hazard sprained his leg, he has a little problem with a groin muscle," Chelsea boss Guus Hiddink told a post-match news conference.

"We will see more with an MRI scan tomorrow."

Chelsea responded impressively from the loss of Hazard to record their first away league win since August.

Cesc Fabregas was influential throughout as Oscar, Willian and Diego Costa scored.

But Hiddink chose to reserve praise for an unsung member of the Chelsea squad after John Obi Mikel anchored the midfield in assured fashion.

"Mikel played very well, he's the ideal player to bring balance to the team. He knows the game very well and how to cope.

"We know there is a lot of quality in the squad, not just in the starting XI. When they get the ball they can play."

Hiddink talked down the potential for the victory to galvanise a dreadful campaign, although he suggested Chelsea can still challenge for Champions League qualification from their lowly position of 14th.

"Do not go over the top. It is the first win after a worrying period with two draws so the team desperately needed the win and it was convincing," he said.

"Everyone knows we have a lot of quality in our team, but sometimes champions have a tendency to be complacent and it can be difficult to get back and then wonder why we were champions.

"There is a long way to go, mathematically the possibility of Champions League is still there. The league is so strong but as long as we play like we did today I will be happy."