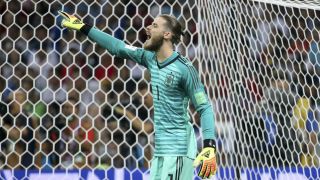 Spain coach Fernando Hierro has insisted he has full confidence in David de Gea and the Manchester United man will retain his spot in the side despite his mistake in the draw with Portugal.

De Gea fumbled an effort from Cristiano Ronaldo from distance in Friday's 3-3 draw with their Iberian rivals and made a similar mistake in a warm up match against Switzerland earlier this month.

Criticism for the goalkeeper has been widespread following his latest blunder but Hierro, set for just his second match in charge of La Roja, has confirmed that De Gea will start against Iran on Wednesday.

"I see David as being very calm and he has all our confidence in full," Hierro told a media conference.

"Players need confidence and support at all times and my decision [that he will play] is very clear. I will be fair with every player.

"The squad has had a day off and that helped David relax and step away, because we are more interested with natural methods in our preparations, making sure we get our heads right."

Spain midfielder Isco also backed De Gea to bounce back from his disappointment, adding: "David is fine. No one likes to fail. He is one of the best goalkeepers in the world and he knows how to react. We're giving him a lot of affection."

Isco, featuring at his first World Cup, spoke of the squad's desire to perform after Spain's failure four years ago - where they tumbled out in the group stages.

He continued: "This team is very proud and [full of] heart, we are really looking forward to doing things right. We will grow up against adversities and we will not crumble at any time."